For the land supply assessment for Latrobe, in addition to the Victoria in Future 2008 projections, an alternative demand scenario has been presented ('development trend'). This scenario is a simple trend based assumption directly relating to the amount and distribution of recent residential lot construction activity. An alternative demand scenario was developed due to the significant difference to the projections contained in Victoria in Future 2008 compared to recent building approval and residential lot construction activity.

In terms of zoned residential land stocks it is estimated based on the identified supply and Victoria in Future 2008 demand projections, there are sufficient land stocks to satisfy over 15 years of future demand. Alternatively, it is estimated that there is 10 years of supply, based on the 'development trend' scenario. From a supply side, this is based on a zoned lot potential of 5,918 lots. 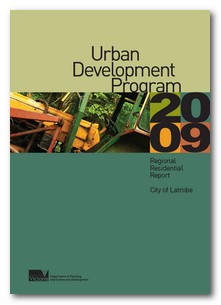 Note: This document is a large file and may take some time to download. The report is also available for downloading in smaller sections and in accessible format below.

Maps from the report have been split and attached in PDF Format in both full colour and black and white.

Based on analysis of aerial photography and stakeholder consultation, the consumption of land in the Latrobe Urban Area Total for industrial purposes has averaged 3.1 hectares per annum between 2006 and 2009.  The majority of consumption has occurred in Morwell and Traralgon. Over the same period consumption in the Morwell Specialised Industrial Area and was 2.6 hectares per annum.

In total, there is in excess of 15 years of industrial zoned land within the municipality based on the average annual rate of land consumption in the period 2006 to 2009. However, this is not evenly distributed across the urban areas; with supply in Traralgon currently estimated at around 12 years. Note: This document is a large file and may take some time to download. The report is also available for downloading in smaller sections and in accessible format below.

Maps from the report are available separately in both full colour and black and white.